Nyck De Vries took his first Formula E victory after a perfect display under the lights in Diriyah.

He had a second over Wehrlein at the end of lap one and was able to hold him at an arms length forcing the Porsche driver back into René Rast who looked to be the only rival to De Vries today.

He aced two safety car restarts leaving the competition in the dust.

Edoardo Mortara finished in second place ahead of Mitch Evans and Rast.

Mortara had a storming race, fighting everybody he came up against expertly and pulling off a beautiful double move to pass Evans and Wehrlein which put him in podium contention.

Mitch Evans kept himself to himself mostly saving energy and using brilliant pace and a decisive penultimate lap overtake on Rast to secure a first podium since his victory in Mexico over a year ago.

The race began with a brilliant start by De Vries who waltzed away whilst Wehrlein defended from Rast behind.

Wehrlein and Rast closed on De Vries whilst Mortara defended fourth with a long train behind to 11th place.

This was where it stayed for a bit until the first Attack Modes were played.

De Vries and Wehrlein went early on but were unable to make an impression and Rast was able to close on the lead before the Safety Car came out after a collision between Alex Lynn and Sam Bird.

Both tucked up behind Evans and Mortara, Bird sold a dummy move to Lynn into turn one but Lynn turned in on him and put him into the wall which forced Lynn into a spin and the two collided nose to nose ruining both their races which had been impressive.

Find out how you can watch live here >> https://t.co/2WSTHwAqM2 pic.twitter.com/93Vqus3Qnj

At the restart, De Vries rebuilt his gap and crucially was able to take his next Attack Mode without losing a position.

But then Max Günther, who had been running in the points, went a touch wide and slammed into the wall, ripping apart the rear suspension and leaving the BMW stricken on the side.

As this happened, Rast took Attack Mode and the Saftey Car came out.

De Vries floored it and built up the lead straight away so he could coast to the finish as Mortara took his Attack Mode and let Rast past.

He managed to repass Rast but was unable to touch the mighty De Vries and had to conserve energy. Evans threaded his way past Rast to take away what would have been a well deserved podium for the reigning DTM champion.

But it was De Vries who deserved every plaudit after a fierce and excellent drive to take a clean sweep of the E-Prix and his first ever Formula E victory.

Behind the podium sitters and Rast and Wehrlein were Oliver Rowland and Alexander Sims who were working their way through the field together and diced with the other a fair bit with Rowland the highest finisher of the Group 1 runners.

Stoffel Vandoorne came to a points finish from 15th on the grid and Lucas Di Grassi did the same behind just from 16th to 9th.

Oliver Turvey rounded out the points in 10th with NIO 333’s first points since Season 5.

Robin Frijns came from the back of the grid to 17th followed by Tom Blomqvist and Nick Cassidy.

Sergio Sette Camara and Nico Müller, the two Dragon Penskes were the last classified finishers in 20th and 21st.

The DNFs were Max Günther, Sam Bird and Alex Lynn.

The next race is tomorrow with qualifying at 13:00 GMT. The groups take on the reverse of todays results with fast cars spread across the field there could be an entirely different story.

Formula E is back. 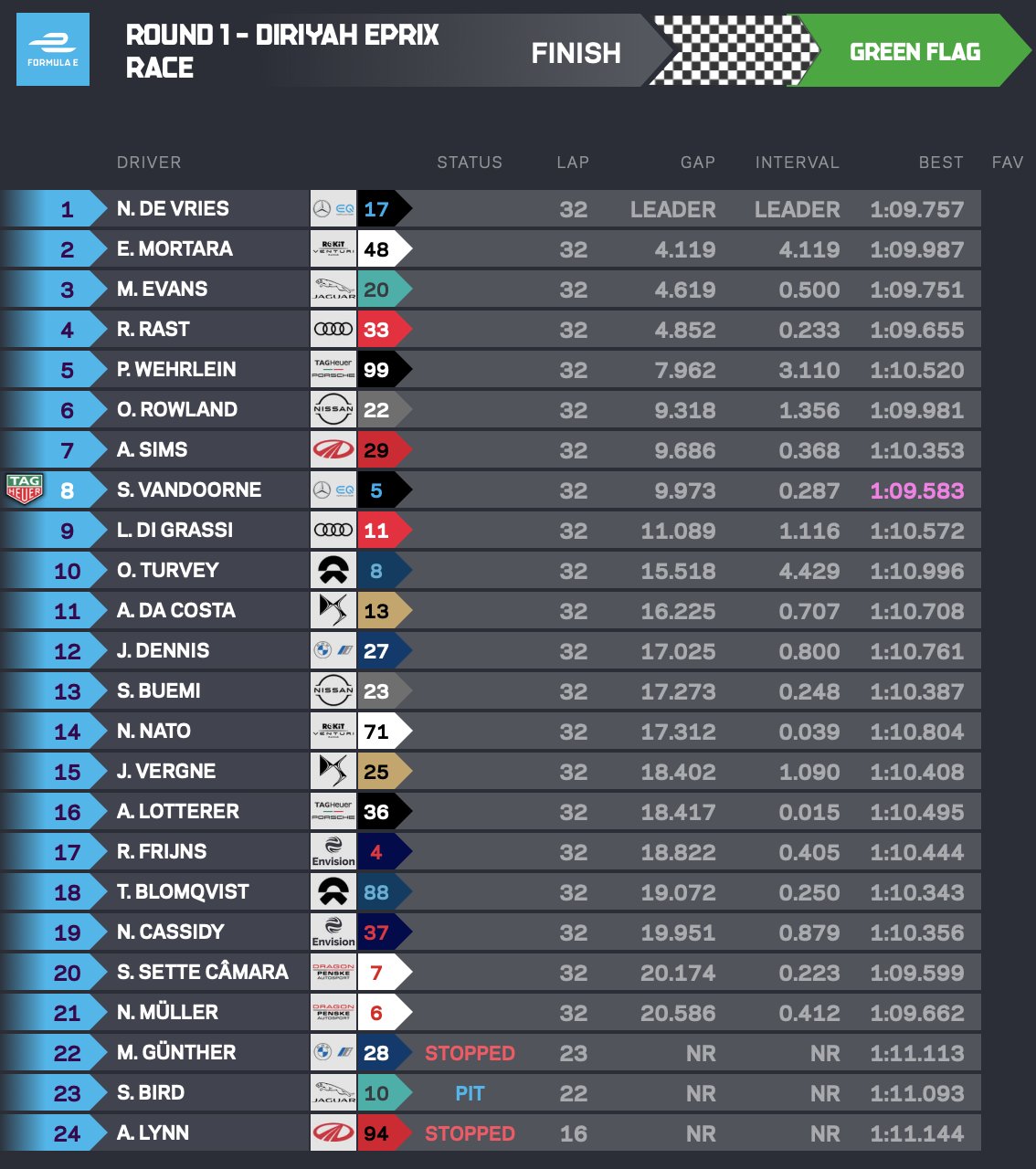 FE: Jake Dennis wins with a supreme display in Valencia

Valencia E-Prix: De Vries wins as half of the drivers run out of energy